Driving Speed Vegas in a Ferrari 488

We visit Las Vegas about once a year or so.  I don't gamble and I am not much into the night life either but Vegas has many more things to do than that.  One great example is Speed Vegas. I found this a few years ago and it has been on my list to try for a while.  I finally did it.  I would recommend it to others.  They have a nice selection of cars and you get to take them on a track at speed, where these sports cars belong.  While you can rent cars like these and drive them around on the street, that is actually more money and you will never (legally anyway) feel what they can really do.  At Speed Vegas though you do get to feel the car at speed on a track.  They have great instructors and the process is simple.  If you have never been on track at speed, this is a great way to get introduced to it.  If you have done track days, this is a great way to see what those cars you have been pining away for are really like without having to buy one. While the cost is about the same as entry to a track weekend, this is a different thing being able to drive their cars.

Looking at the selection of cars the two I wanted to drive most were the Ferrari (458 or 488) and the Porsche GT3 RS.  Since I had never even driven a Ferrari, I chose the 488 with their 5 lap package. 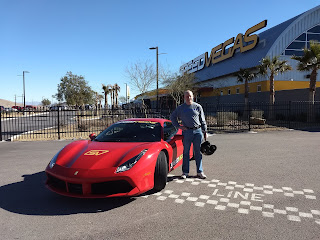 They start with a drivers meeting like any other track event.  There they explain the track layout, basic cornering and braking, explain the cones, passing, etc. They fit you with a helmet, pair you with an instructor and out you go to the car. Heading out to the track you test the brakes, wait for clearance, and enter the track.  The instructor talks very quickly showing you the line, braking and turning points, shift points, etc.  For the next 5 laps you just keep correcting mistakes and improving.  At the end you get a photo of you with the car you drove.

The track is a collection of small corners along the back and a decent mostly straight on the front.

Its not my favorite track but it does the job well to let you feel the cars. The first time to drive a track it is clumsy.  It takes a while to learn the track and get good at it.

If you have never done track days before, I would recommend starting Speed Vegas with the Cayman.  It is less money and it would be a blast at this track.  When I was there they had a Cayman GTS and 5 laps in it was under $200.  I would think this would be the best bang for the buck your first time here.  Then once you are familiar with the track in the Cayman, try one of the more exotic cars next time, or add another car right after (which has a discount).  For me I plan to try the GT3 RS next time, presuming they still have it then.


If you are interested in cars that Speed Vegas does not have, or you want to try a different track, there are another places very similar at the Las Vegas Speedway Commerce Center North if Las Vegas.  For instance Exotics Racing and Dream Racing.

This is the first Ferrari I had ever driven.  I rode through town in a 430 once but that was my total time in a Ferrari up to now.  This car makes about 660HP.  My Cayman S makes less than half that. The Ferrari does weigh about 300lbs more than the Cayman S though. The brakes were great.  They were steel rotors for track duty but had a solid feel and you could push them very hard.  They were easy to modulate and not prone to lockup.  Honestly, it was similar to my Cayman S with moderate track pads.  We had it in sport mode the whole time.  The traction control was too aggressive in this mode.  I am pretty sure the delay in power was much more than turbo lag.  At times under hard cornering when you wanted to apply the power and track out it was very slow to respond.  It had more under steer than I like too.  As far as cornering, it did not feel like it had anything over my Cayman S.  In fact, the Cayman feels more connected and agile. Once the power came on full it accelerated nicely but was never a handful.  The car was great to drive but honestly I still love my Cayman S.  Maybe if I drove the car much more, and took it to a few track weekends I would change my mind but I doubt it.  I left still loving my Cayman S which is a good thing. 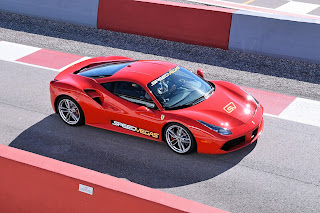 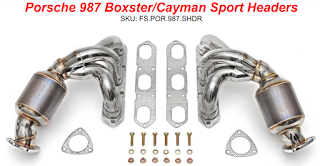 When I bought my Cayman S it had a check engine (MIL) on because of a catalyst efficiency fault, meaning the catalyst was no longer passing a test the OBDII system does to ensure it is working properly.  I was able to trick it by moving the downstream O2 sensor but that would occasionally give another fault.  I researched what options I had for replacing the catalyst.  On this car the catalyst is part of the header assembly.  I started looking into high performance headers.  There are some options out there from a few different manufacturers but the best appeared to be Fabspeed.  They were also the most expensive.  When I started looking in 2014 they were $3500 a set.  Yikes.  That seemed pretty high so I waited.  They finally dropped to $2,895 a few years later.  Then I got a coupon for 10% off through Pelican parts and I was very close to buying.  Then one day in early December 2018 I saw an ad for a Fabspeed sale right at the Fabspeed website.  I figured it would be hats and shirts but my headers were on sale for 15% off.  I immediately added to cart and bought them.

I made a short video to hear the old exhaust as I started the car cold to compare later.


They came in after Christmas and I made an unboxing video. 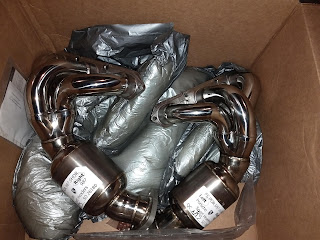 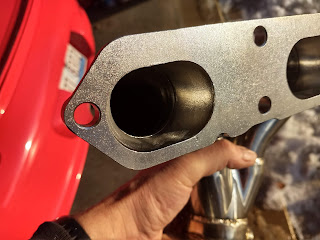 I was impressed with what I saw.  They were like art, but much more useful.  It was cold and the roads were salty so I waited to install them.  Finally March began to warm up so I put them on.  It took me an afternoon.  I had a few complications as can be expected when working with older exhaust.  I had to cut the bolts for the 3-bolt flange and I had to replace one of the downstream O2 sensors (longer story).  Since I had taken the right side muffler off before, the rusted flange bolts had already been replaced.  I had the right side out in 30 minutes.  The headers fit very well.  I did not upgrade the rest of the exhaust, except the muffler outlets I had done just after buying the car.

While most cars are a big hassle to replace headers, the Cayman is very simple since everything is really under the car with nothing in the way.  You can easily see and access all of the head flange bolts. 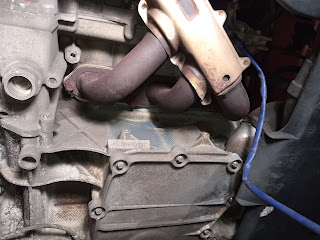 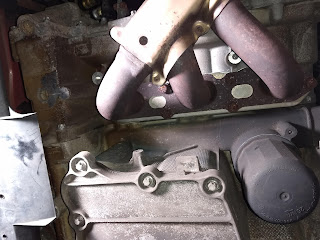 The other end has a simple 3-bolt flange which is easy to access after removing the wheel and the small plastic panel. 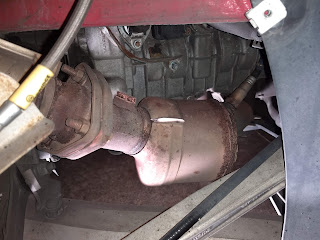 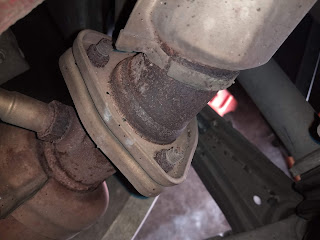 The factory nuts rust to the bolts and almost never come out.  Some will break off, others you have to get out the cutting tools.  That is the hardest part of the whole job.

Here are some shots comparing with the factory headers. 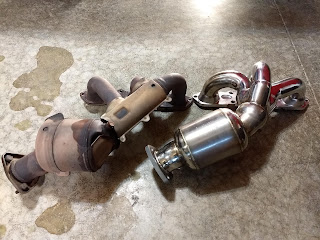 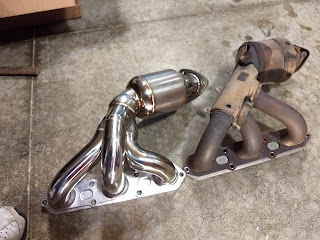 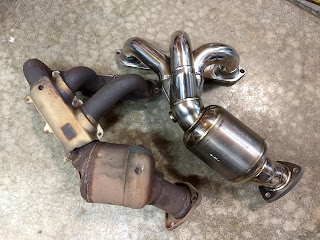 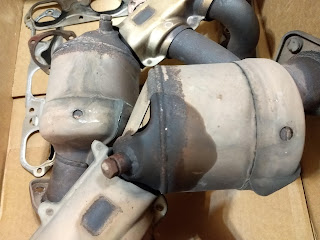 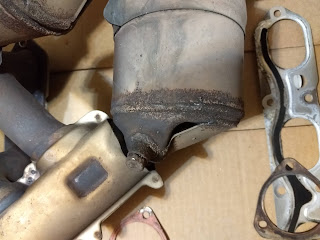 I am surprised how bad the factory headers look for performance.  The Fabspeed design is far better. 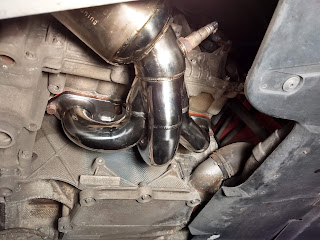 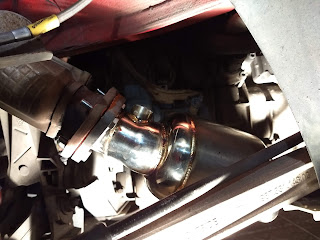 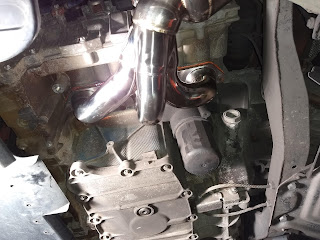 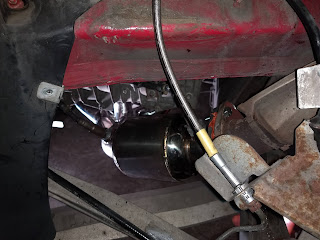 Here is a video of the very first cold start after the header upgrade. Since I changed only the headers you might expect the sound to be about the same.

It could be my imagination but it seems to rev quicker now.  It does seems to have slightly different sound on acceleration too.  At idle is seems about the same (as expected).  Driving the car after the header install is only slightly different than before.  It seems smoother and it does feel like the power is smoother and a bit higher everywhere.  Some have said they lost a bit down low and gain at the top.  In my case it seems like it gained a bit everywhere.  My case is unique since I left the stock mufflers and downstream cats in place.  As I mentioned before, I had already replaced the very restrictive outlet "T" with mandrel bent tubes back when I got the car.  I also removed the intake sound snorkel and panel and installed a K&N air filter around the same time so both of those mods were done well before.

I plan to install an intake plenum and 82mm GT3 throttle body next.  I am also considering what to do with the mufflers.  Sound is a personal thing.  I don't like a raspy sound or a drone, nor do I like cracks and pops, so I want to be careful to not do that.  I like the sound I have now but would not mind turning the volume of it up a bit.  I am more interested in power than loud.  I also like the induction sound at wide open throttle more than exhaust sound.

Update 3/24/2019: After driving the car a week through several warm-up cycles and some good highway runs I re-torqued the headers per the instructions.  Some bolts were a tad loose so this is a good thing to do and it is very easy (literally a 15 minute job). As expected the headers do change color with use.  Now they look gold (aligning with the price I suppose). 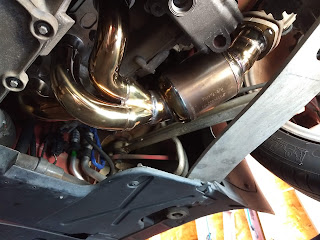 Update 3/29/2019: Now that I have been driving it for a couple weeks I have noticed more about the performance and driveability.  There is a hill on my way home that has a 45mph speed limit.  Before the headers I would have to downshift for that hill, now I don't.  The performance at low RPM is smoother and it has more power there.  Light throttle operation is crisper than before.  The engine is a bit more responsive to throttle input.  The power seems to be a bit more everywhere.  The difference is not huge but it is noticeable.