I drove a Ferrari 488 GTB at Speed Vegas last year.  This year I decided to try something totally different and drive the Mustang GT500 at Exotics Racing at the Las Vegas Motorplex.  I booked it the night before but when I got there, the car was in the shop so they asked me what other car I would like to drive instead.  I already had 2 at the top of my want list: The Porsche GT3 RS and the Porsche GT2 RS.  I was able to upgrade to the 991.1 GT3 RS for no additional cost so I went for it.  Exotics Racing does it a bit different than Speed Vegas.  The biggest difference is the 2 laps ride in a Macan to orient you with the track.  That is a nice touch. 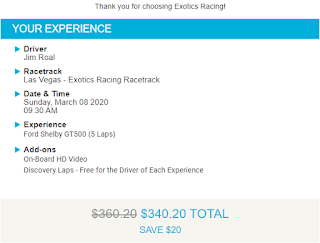 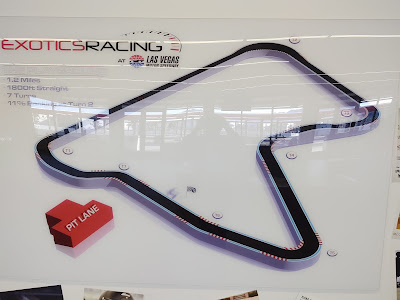 The track is 1.2 miles long with some small elevation changes and banking on turn 2.  The longest straight is still short (1800ft) but it is enough to have a great time and get a good feel of the car.  The mild elevation changes give you a feel of the cars balance under dynamic loading pretty well.  There are 2 turns that are well over 90 degrees.  This track was a bit easier to learn than Speed Vegas since all the corners are very unique.  It is very helpful to have an easy to learn track when you only get a few laps on it.  The drift car leaves a bunch of rubber on the track and much of it is off-line and that can throw you off as your eyes tend to follow it and not the true line.  The section of the track up near the building can get confusing too as the track appears to have been shifted but the old route still shows.  Here again the drift car makes a bit of a mess of it as it takes a different route out of the pits.

This is one of my favorite cars.  I am a big Porsche fan and the GT3 RS is the most engaging drivers car in the lineup.  I suspect the GT2 RS is even better in some ways (power obviously) but the GT3 RS just fits perfectly and does everything you want with no effort.  The sound from the high revving naturally aspirated flat 6 is one of the best engine sounds out there.  The engine response is very crisp too.  Being used to my Cayman S on tracks really helped as this car felt very familiar.  On this track we only shifted up on the main straight and back down in turn 2.  Of course I was plenty sloppy not being at all familiar with this track, or the car.  I never got the car to even squeal a tire.  The grip was fantastic with the Pilot Sport Cup 2 tires.  I looked at my ranking compared to other GT3 RS times at this track and I ranked 1500 out of about 3382, and 6451 out of  43165 for all cars.  I think the GT3 RS times included both 991.1. and 991.2 GT3 RS as they don't show them separately.

This car is amazing.  Even with my sloppy 5 laps around this track I got a good feel for what this car may be capable of.  I was never at the limits of grip at any time.  I had plenty of room for more speed everywhere.  The 5 laps were over real fast.  In retrospect, more laps might be worth it.  I think I could easily trim 5 seconds a lap off my least bad time with just a few more laps (and a less nervous copilot).  He had me braking early and corning slow which I suppose makes sense until you get used to the track. I don't envy these instructors sitting in the passengers seat in a very fast car at speed on the track and no idea what kind of nut they have behind the wheel.  I highly recommend this, or Speed Vegas, next time you are in Las Vegas.  Next time I might try out Dream Racing so I can compare these three.