I did a dumb thing but it turned out OK.  When I took the Cayman out of winter storage this spring and warmed it up for the first time in a while, I smelled coolant, although none leaked to the ground.  I have seen water pump seals do this before.  On most older cars the water pump has a simple bushing that runs in coolant so a small seep that quits is not necessarily a big deal.  My F250 would do this on severe cold weather but never had a pump failure.  However, the Cayman water pump is not like that.  It has a sealed roller bearing instead, which is far better and should last for life.  However, if you get coolant seeping through the bearing, the bearing will die pretty fast.  The grease will get washed out, the bearing will run dry, and fail.  Well, that is what happened to me.  I had noticed a growling noise from the engine when I started it that morning.  My first thought was far worse than a water pump.  I feared my IMS bearing was going out.  After recalling that I did see dry evidence of coolant from the water pump I sorta convinced myself it could just be some coolant on the belt, which can make all sorts of weird noises.  Honestly I was not that convinced, I was just lazy and in a hurry to meet with some friends.

On my way back from breakfast where I was meeting with friends I heard a pop and immediately my steering assist was gone and the charging system warning came ON.  Right away I knew I had lost the belt.  I carefully drove the rest of the way home, accelerating moderately up to speed, shutting OFF the engine, and coasting between lights.  By the time I got home the coolant temp was a bit over 200F based on the gauge.  Still safe but I would not want to get it too much hotter.  With no belt, the coolant does not circulate.  You can't go very far like that.  In the video below you can hear the pop right at the beginning.

It is not real loud and I did have the stereo going.  I quickly turned OFF the AC and opened the windows too.

Once I was home, I removed the panel behind the seats to expose the front of the engine where the belt and water pump are.  I saw the slack belt but upon further inspection I found the water pump shaft had completely sheared off and the pulley was just laying there. 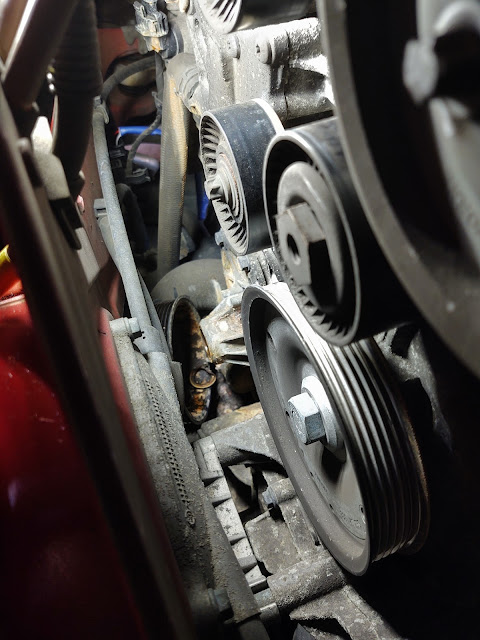 Glad to see it was just a water pump, I quickly ordered parts through the local dealers online website.

Mid-engine cars have a much trickier cooling system since the engine is in the middle, and the radiators are in the front fenders ahead of the wheels.  This makes it an air pocket nightmare.  A vacuum system is needed to pull a vacuum on the cooling system and suck the coolant in.  I found this one on Amazon for $39.99. 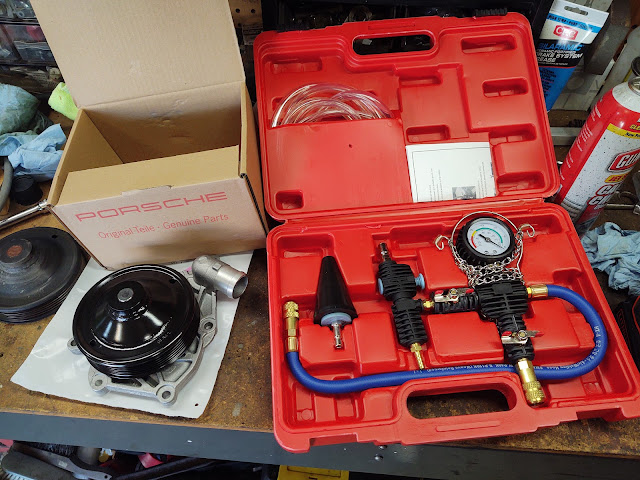 Having the engine behind the driver and not even visible without removing bolt-in panels and carpet sounds like jobs like this would be much harder.  However, it is not too bad really.  It takes about 15 minutes to remove the carpet section and both the top engine panel, and the front engine access panel. Once you have these panels off, access is pretty good for most things.  I will say charging the water pump on this car is far easier than most front-wheel-drive cars.
I positioned the car on a ramp on the drivers side, and jacked up the passengers side as high as my jack stand would allow.  This positioned the coolant reservoir as high as possible relative to the car. I did this to keep the radiators and heater core full of coolant making it easier to ensure all the air was out when I was done.
I started by clamping the radiator hose and one of the heater hoses. 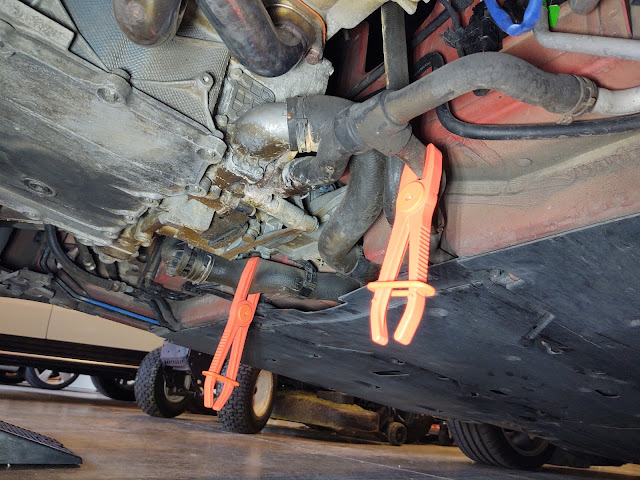 I loosened the hose connected to the water pump at the bottom and stuck an Allen wrench in it to allow the coolant to drain in a more controlled fashion.  In this position, and with the clamps in place, about 2 gallons of coolant drained into the pan I had to catch it.  I then removed the water pump.  It is basically just a set of small bolts.  The nice thing is the gasket is metal and does not stick to the block so it left a clean surface.  Here is a photo with the pump removed. 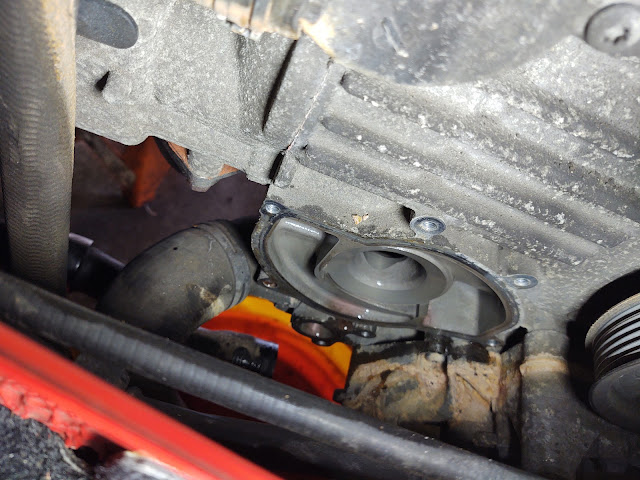 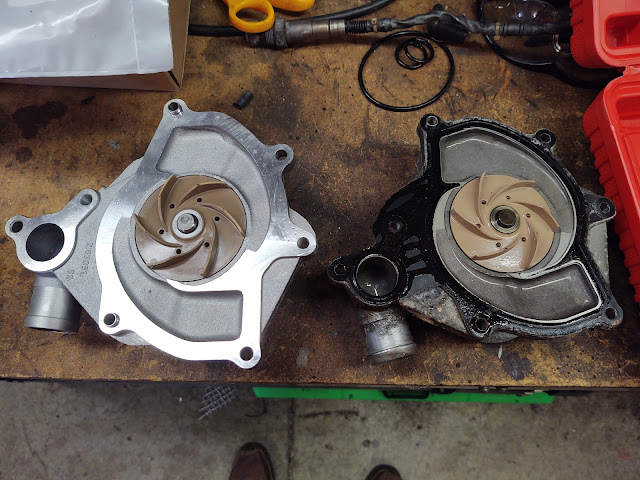 Here is a photo with the new pump installed. 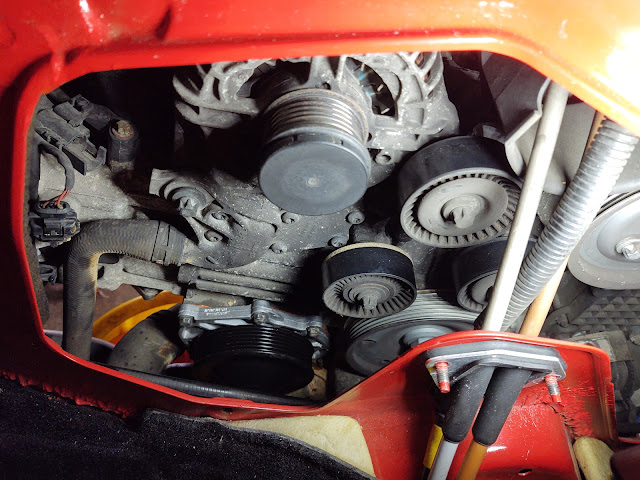 Before removing the hose clamps, I drew a vacuum on the cooling system and pulled in the coolant. 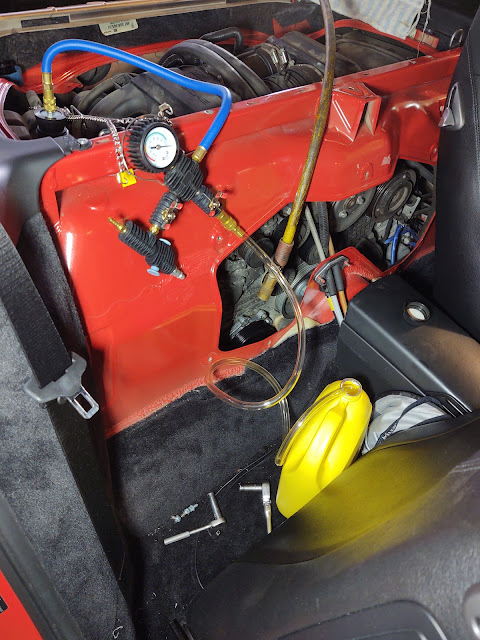 I was able to pull in almost 2 gallons right away.  Remember to open the air bleed valve in the top of the reservoir to allow the air to escape the block while doing this.  I then released the clamps, installed the belt, and ran the engine.  With the engine running I could feel more air purging through the air bleed hose that connects from the oil cooler to the reservoir.  I added about a quart more coolant at this point. I ran the engine some more until I could feel the heater hose warm up, indicating I was getting coolant flow.  I ran the engine until the thermostat opened and I could feel the radiator hose at the radiator warm up, indicating flow to the radiators. I did all of this while the car was still raised.  I took it for a good road test, hitting 7,000rpm at times to create high coolant flow and purge any remaining air.
The whole job took me about 3 hours.  Not too bad.