I do track days in my 2006 Porsche Cayman S.  The car is basically stock.  This article is a collection of my thoughts around the topic of brakes.

When I got the car it had a little over 60k miles on it.  I replaced the brake pads with Hawk HPS.  They seemed OK but not really an improvement over stock.  At Putnam Park and Autobahn I did notice these pads would start to fade when hot so I switched to Hawk Street/Race pads which made a huge difference.  These Street/Race pads are basically race pads that work down to cold temperatures.  They are noisy and create copious amounts of dust like any other race pad so its not something you actually want to drive around with daily but they do work for the street, unlike race only pads.  The nice thing about these is you can swap them in at home and drive to/from the track with them and be safe.  The noise when stopping at times is only somewhat embarrassing but not enough to be worth the hassle of swapping pads at the track.  The stopping power is more than double the stock or HPS pads.  They create far more friction for the same pedal pressure.  So much that it takes some getting used to as the first few times you hit the brakes after swapping them in you are surprised by how hard it stops with such little effort.  Once you get used to driving with them, swapping back to the street pads feels a bit alarming at first.

MU is the coefficient of friction, higher means more friction.  More friction means more braking force for a given pedal pressure.  Notice that most race pads do not work well at low temperatures which makes them a problem for street use.  In this case low temperature is often well above ambient.  As you can see some of the pads perform very poorly below 300F.  In addition to the problems at low temperatures, they are generally very noisy and can produce copious amounts of dust too.

Most Porsches come from the factory with drilled rotors.  The reason drilled rotors became popular is performance applications decades ago was because of a gas layer that would form at high temperatures cause interference between the pad and rotor.  Modern performance brake pads have significantly reduced this problem, and better solutions have evolved.  One of the problems with drilled rotors is they can crack under the temperatures and stress of track use.  Mine started cracking at Road America which is particularly hard on brakes.  Here is a photo showing the small cracks starting to form. 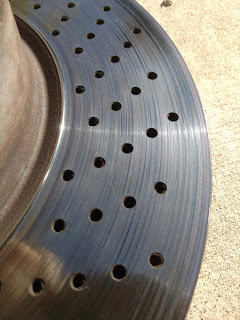 This rotor is not too bad but those cracks can grow.  In extreme cases, the rotor can break off in chunks which is dangerous.  The best solution for track duty is slotted rotors.  I switched my rotors to Sebro slotted.  This photo shows the slotted version next to the factory rotors. 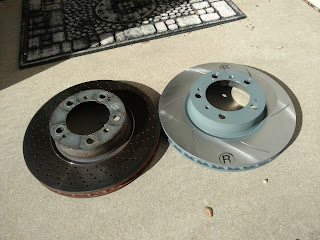 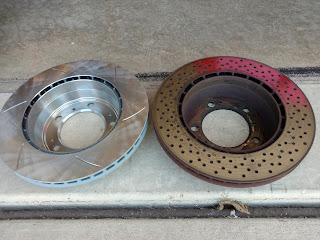 The slots in the rotors help clear the gas layer but don't tend to crack like the drilled rotors.  The slotted rotors also have more metal mass to absorb more heat.  This will help slow down the heating some under hard braking.  The heat can then be released between corners when the brakes are released.

Brakes slow the car down by converting mechanical energy (momentum) into heat.  Changing the momentum of the car requires power (HP).  The engine provides the power to accelerate and the brakes provide the power to decelerate (in conventional powertrains).  Normally the braking power capability is much higher than the engine power.  This is a large amount of energy that the brakes much dump as heat.  The rotors require airflow to facilitate this cooling.  The Cayman/Boxster and 911 sports cars have brake cooling ducts to guide more air to the rotors.  The Porsche GT (GT2, GT3, and GT4) cars have more effective cooling ducts that can be fitted to the other 911 and Cayman/Boxster models.  I installed GT3 cooling ducts on my Cayman S.

Here is a photo of the factory cooling duct. 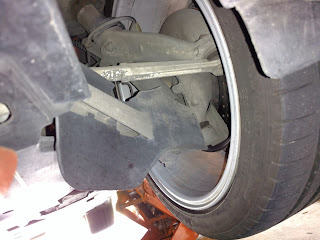 Here is a comparison of factory versus GT3 cooling ducts. 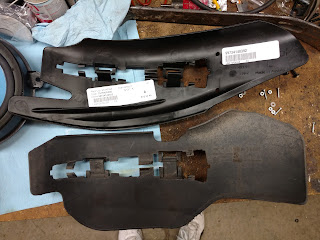 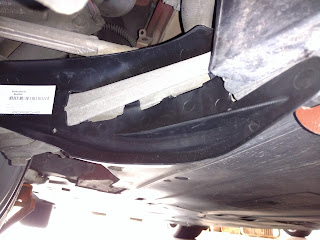 The brake hydraulic system has very high pressures.  Most of the system uses steel allow lines to route the fluid between the brake components.  However, the brake calipers must move relative to the chassis so hoses are required for this part.  Those hoses are generally made of reinforced rubber.  The problem is that even though these hoses are reinforced to reduce expansion, they still do exhibit some expansion under high pressures.  The fix for this is stainless steel hoses.  There are several available in the aftermarket but make sure you use DOT and TUV approved hoses.

Brake fluid is NOT created equal!  Also, good quality fluid with high wet and dry boiling points is very important, especially in a car that will be used on the track.  When driving at speed on the road course, the car will see repeated heavy braking for 25 minutes or more at a time.  This will cause the calipers to heat up.  If the temperature gets high enough, the fluid can boil.  When this happens the boiling displaces fluid in the caliper with gas.  The displaced fluid is pushed back into the master cylinder.  The gas is compressible.  The next time you hit the brakes the pedal goes to the floor with little to no braking at all.  This is a very dangerous situation and must be avoided.  Any decent track inspection checklist will include replacing the brake fluid just before the event, generally within 30 days.  This is a simple procedure and even expensive brake fluid is far cheaper than loosing brakes at the track.  A good DOT 4 brake fluid is Motul 600 or 660 which is available from many parts stores that sell performance products.  There are other high performance brake fluids.  Pay attention to the wet and dry boiling points.  The reason it needs to be changed so often is water will mix with brake fluid, unlike oils.  Humidity and condensation will get into the brake fluid over time.  Vehicles that do not see high brake temperatures are far less likely to have a problem.
Posted by Jim Roal at 9:07 AM No comments: