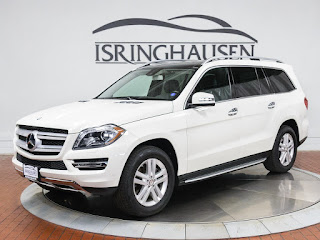 We finally sold the aging Volvo XC70 and upgraded to a 2013 Mercedes GL450 in the fall of 2018.  We wanted a vehicle that could comfortably travel 5 adults and luggage, be able to tow the Cayman on a trailer for track days, drive great in the Illinois winter, and haul stuff.  While I am not a fan of SUVs generally, they do have their purpose and the U does stand for utility (although I often refer to SUVs as silly urban vehicles).  We bought it certified pre-owned (CPO) from Isringhausen in Springfield with 64k miles.  We had considered several vehicles including Audi Q7, Lincoln Navigator, Ford Raptor, Volvo XC90, and more before deciding a GL fit us best. We had been looking for a GL for about a year.  We came close to buying a 2007 in 2017 but found it had issues.  Most of these prior to 2013 also had the air bag recall and no fix in sight. While I was hoping to spend less on an SUV we went ahead and stepped up to the 2013 and I think it was a good choice.  While we were looking at this one, Isringhausen also had a 2012 GL550 and we drove that one as well.
The 2012 GL550 (X164) is the last of the older design and we really liked the improvements that came with the 2013 (X166).  The 2012 had around the same miles and was also white.  We did not want black (which over half seem to be) and silver was not our favorite color either.  It was nice to have 2 while ones that were both in the year and price range we were looking for.  While the GL550 always gets more power than the GL450, the GL550 has other nice features like real leather and heated rear seats.  Between these 2 vehicles, the GL450 has a wider powerband and more torque due to turbocharging and direct injection.  It has only 20HP less than the 2012 GL550.  Acceleration to 60 is actually the same for these 2 vehicles but fuel economy is 2mpg worse for the GL550.  I also preferred the 19 inch rims of the GL450 to the 21 inch rims and wider tires of the GL550.


Ours has the panorama sunroof (3 glass sections) which makes for a very open feel.  We also have lane tracking, Parktronic, trailer towing, lighting package with Bi-Xenon adaptive headlights, Keyless-Go, and more.  While it did not have heated back seats, we just put a regular heated blanket back there and plugged it into the existing 115V outlet under the back seat.  Works great actually.

Just shortly after buying it we took a 1000 mile trip in it.  Gas mileage was as expected, 19.9 on the highway but we were moving along briskly with 70MPH speed limits the whole way. The total trip also included in-town driving as we made many stops and spent time at the destination. 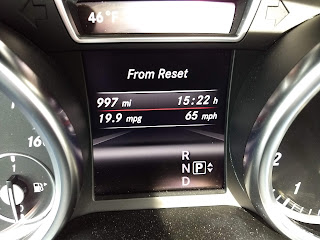 It drove great for an SUV.  Like our E350, there was very little driver fatigue.  Very comfortable.