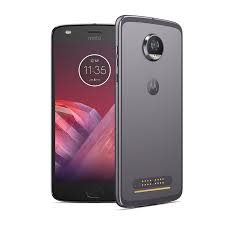 You may have seen my post last summer as we were starting to shop for cell phone upgrades.  We ended up getting a Moto Z2 Play Verizon edition in August and then a Moto Z2 Play unlocked in December.

Moto Z2 Play Verizon has 32GB storage, 3GB RAM, and Verizon's bloatware.  It retails for $408.  We got it with a special discounted Kate Spade battery mod.  We bought this one in August

I have read several early reviews of these devices complaining that they shrunk the battery.  Apparently these people have not actually used these devices daily long enough.  Battery life is never a problem.  First of all, these are not really meant to be used without a mod attached.  They feel ridiculously thin and they are slippery without a mod attached.  They also look silly with no mod.  The obvious mod to get is a battery mod.  I bought the basic 2200 mAh battery mod for $37 at Best Buy on sale (regularly $49.99).  With the mod attached the phone feels about the right thickness and the mod has a great grip.  Now the phone has 3,000 mAh internally and with the 2,200 mAh mod you now have a total of 5,200 mAh which is much more than the vast majority of phones out there.  The battery mod features a special efficiency mode which helps use the phones battery in a way that preserves its life.  It uses the phones battery first until it gets to 80% state of charge, then it uses the mod battery to 0%, then switches back to using the phone battery.  At the end of a typical day both batteries are at about 80%.  I have had days where it barely used the mod.  This phone is very efficient with its energy use!  I was shocked how little battery it used even with heavy use.  I just purchased the Moto Turbo Power Pack mod for $79.99 and got a free Insta-Share projector mod free.  This Moto Turbo Power Pack has 3,490 mAh.  That makes the total battery capacity a whopping 6,490 mAh on a phone that is very battery efficient.  I don't think there is a better device for battery life.  Those articles complaining that this phone lost battery life are nuts.  Also, I keep seeing articles complaining that phone manufacturers are too focused on thin and not enough on battery life apparently don't understand this device.  With this Moto Z2 you can have it your way.  Want thin, remove the mod.  Want battery life, you have many to choose from.  You can switch in an instant.  It is the best of both worlds.  Also, you can swap out the mod while the device is powered in a second with no interruption.

Other thoughts on battery life

I did some basic extrapolation based on my battery use.  I estimated I could go over 4 days without plugging in using the 2,200 mAh battery mod.  The 3,490 mAh battery mod would take it to about 6.  This is with my typical use.

Batteries do degrade over time.  The best way to maintain a phone battery is keep it between 60% and 80% state of charge.  I also suspect that quick charging has a negative impact on the durability of the battery.  The great thing about the Moto Mod battery system is that the mod battery is taking the biggest hit.  You deep cycle it the most meaning it will be the first to degrade.  When this happens you simply by a replacement battery mod and snap it on.  No installation required.

The other thing to consider is how quickly you can charge this up.  The Motor Turbo Power Pack quick charges using Qualcomm Quick Charge 3 or USB-C.  It has its own USB-C port so you can plug it into one charge and the phone into another at the same time.  The combination can charge at 30W.  This means you can get a bunch of added time with only a short charge.  Say you are in an airport between flights and you want another 8 hours of battery, you can quick charge them both and get that in less than 10 minutes.

I am very happy with this display.  My last phone was a Moto X Pure which was LCD.  Its great being back on AMOLED!  So much crisper.  Colors are deeper.

So far this has been very snappy.  We have had the Verizon edition since August with a very heavy user and it is still snappy.

One of the reasons I keep coming back to Motorola is because they use vanilla Android without all the nasty pointless skins and bloatware that others pile on top.  The unlocked Moto Z2 has only a few very useful Motorola features such as Moto Display, Moto Actions, and Moto Voice.  The reviews on Motorola devices often rightfully praise this aspect, as do I.  The Verizon locked Moto Z2 Play does have Verizon bloatware and that is unfortunate.  The very first thing you will want to do with the locked version is replace the launcher.  I use the Google Now Launcher.

Other than batteries the only mod I bought was the Insta-Share Projector.  Well, I actually got it from with the Moto Turbo Power Pack mod which I paid $79.99 for.  That was a great deal as this Insta-Share mod usually costs $299 by itself.  I made a short video about this mod.
When I first saw this mod it seemed like it may have occasional uses but probably not worth the price.  It is actually pretty neat.  I could see many uses for someone wanting to present to a small group.  It is much thinner than I had expected.  When you attach it to the phone, you can still slip you phone into your pocket fine.  It is less bulky than I would have expected.  In that video I am projecting about 75" diagonal I would guess.  I have the room lights dim, as you normally would for a projector.  It does chew up its battery fairly fast but you can plug it in for longer presentations or movies.

I have seen too many reviews of the Moto Z phones that almost make fun of the mods, and ignore them being an integral part of this phone product line.  The Moto Z is not meant to be used without a mod attached in my opinion.  Any review that complains about the slippery back or exposed connector just don't get this product line at all.  In my opinion all the reviews should have included at least a basic battery mod since this is likely how nearly all users will actually use this device.  With a 2,200 mAh battery mod attached, this phone feels about right as far as thickness and grip.  It does make it a bit heavier than most but then again its packing some serious battery power too.  Personally I like the weight as it feels quality and I can easily tell its in my pocket so I don't leave it places on accident.

Update 3/2019: This thing is still working great.  Battery life seems the same as new.  I don't have to think about charging.  I am in the habit of charging each night and I never need to charge any other time.  The phone is still snappy and glitch free.

Both of these phones replaced Moto X Pure.  By 18 months the Moto X Pure had terrible battery life and it became very laggy at times.  Even after 12 month there was a noticeable performance loss and battery life loss.  We could not make it past lunch time without charging.  Those devices had a Snapdragon 808 processor and the Moto Z2 Play has a 625.  It seems like there are huge battery efficiency gains in the 625 versus the 808.  The phone performs far better too.  The software and OS are also upgraded on the Moto Z2 Play.  I waited forever to get Android 7 on my Pure.  I finally just side-loaded it one day but it did not perform better.
Posted by Jim Roal at 7:40 AM No comments: