I shopped around for various parking assistance devices for tight garages, or any garage really.  There are various types but most require that you park a specific vehicle in a specific way to work.  For instance, the old tennis ball on a string really only works for the vehicle you set it up for, parked the direction you set it up for.  I wanted a system that would allow me to park any of my vehicles either direction while minimizing the distance to the garage door.  This way you maximize the space at the front of the garage.

Years ago in another garage I built a simple system using standard garage door sensors, some LEDs, and an old cell phone charger.  It works but this time I wanted something a bit better.  I searched again on the internet for a kit or system I could just buy and install but to my surprise there really is not one like the system I made.

Here are the components I made the system using.

I mounted the alarm sensors 18" high and the distance away from the door opening that I wanted.  This was about right for most bumpers or license brackets to interrupt the beams.  I wired one power supply to the sensor that does not have the alarm relay (less terminals).  The other power supply supplies the main sensor and the LEDs.  The sensor has a normally open (NO) and normally closed (NC) contact which is used to switch between the green and red LED strips. 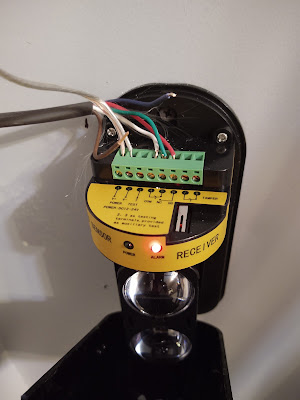 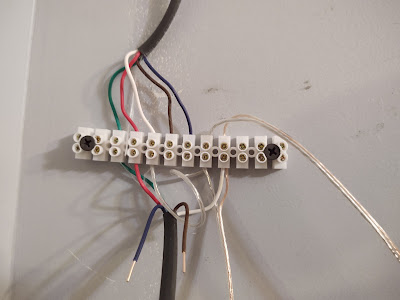 Terminal block above main sensor. Wire pair on right is power supply.  Wires going up go to the LED strips. Wires heading down connect to the main sensor. 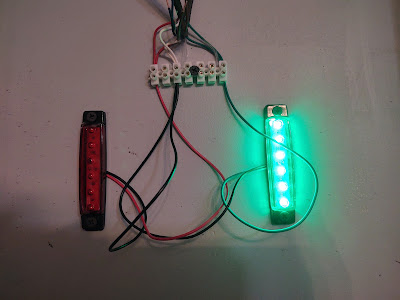 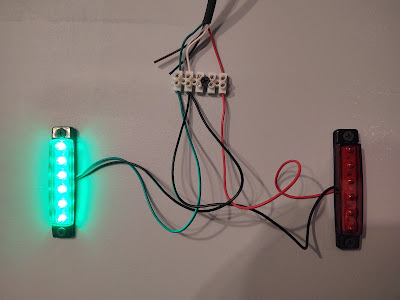 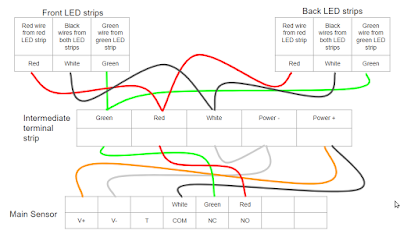 My system spans both doors as in this case there are on the same wall.  Other garages stagger the doors so you may need 2 systems.  I had the aim the sensors a bit into the garage to get the performance I wanted.  I had also planned to add some reed switches and a relay to disable the LEDs when the doors were both closed but after I got it working I decided it was not necessary. The extra wires were for that.  There are many variations to this approach.  I like not having anything to trip over on the floor, or things hanging in the garage.  I like that I can pull the vehicles in either direction, and move vehicles to different stalls and it still works.
These doors do have sensors already to prevent closing the doors on things.  However, those don't indicate if you are parked in the right spot or not.  You can only guess and try to close the door.  I also found the sensors are mounted much too low to prevent closing the door in your car.
Posted by Jim Roal at 9:14 PM

Email ThisBlogThis!Share to TwitterShare to FacebookShare to Pinterest
Labels: garage