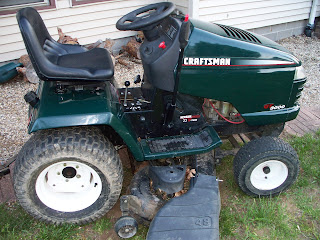 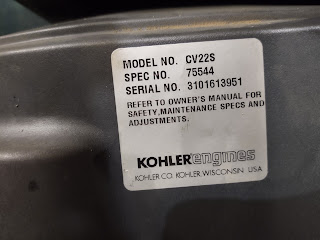 I went to mow the lawn and heard a knocking sound.  I heard it while cranking as well as running.  Engine load made no difference so I figured it was not a main or rod bearing, or a piston issue.  It was an odd sound actually.  I listened with a stethoscope and narrowed it to the crankcase area, not the top end.


I removed the engine and as a drained the oil I could see the metal in it.

Once I took the engine apart, I checked the rotating assembly to find the source of the knock but it all looked good.  Everything was nice and tight still.  Piston skirts looked good too.  This was expected since the knock did not change with engine load.  I had to look deeper.  Finally I found where the crank had worn into the lower case (oil pan) which also serves at the lower thrust bearing.  Strange they have the crank go right against the end case aluminum to serve as the thrust bearing.  I could feel the crank end play was excessive too.  The knock was from the fact that the crank had worn so deeply into the end case that the crank throw was actually grinding into the oil pump gear and bolt.

I measured the crank end play and found it to be 0.080".  That is ridiculous!


You can see in the photo below how worn down the oil pan is on the thrust surface. This is supposed to be flat. 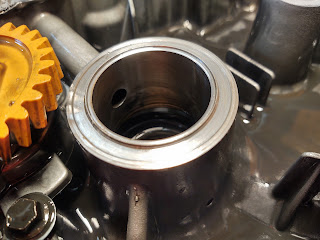 Notice the wear on the oil pump gear. 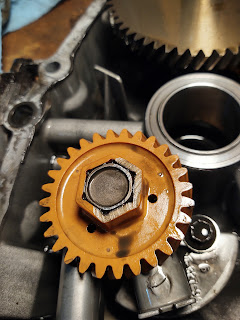 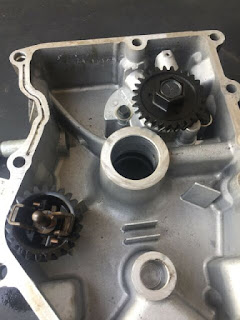 When I think back to the way it sounded it was not a pure knock.  It also had a grinding sound element to it.  Now it makes sense.  By the way, the photo above is a used part listed on eBay at the time I wrote this.  It had a buy it now for $45.  There were several others around the same price.  Far less than the over $200 for a new one.


I put the used housing on and put it back together.  I also drilled a small oil feed to the thrust surface to ensure oil feed.  Comparing the old housing to the new one you can see the difference in gap.  The new one is the top photo below. 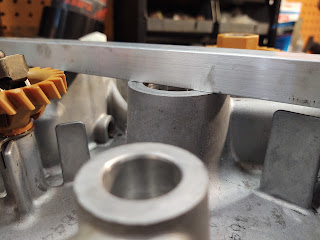 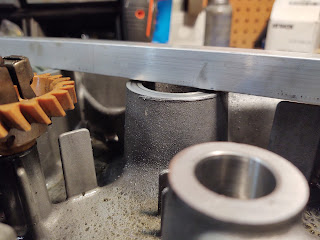 
The engine starts and runs much better too.  This is likely due to the flywheel key being sheared before which can cause the engine timing to be off.  I am pretty sure it has been over advanced this whole time.  I have had it ping on occasion.